A lifetime in Olivetti 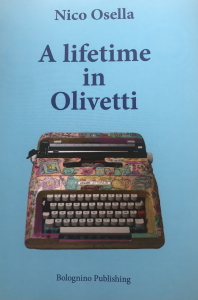 A few years ago we introduced a book by our colleague Nico Osella “Una vita in Olivetti”, which had considerable success and several reprints. For our international visitors, we are now glad to announce the availability of a new version in English (A lifetime in Olivetti), recently presented at the Mondadori bookshop of Ivrea.

The new volume was born at the request addressed to the author by many colleagues of the former worldwide Olivetti organization, eager to reread a piece of their working life and get more information on the history of the company and the city in which it was born. In this sense it is not a real translation, but rather a remake and adaptation of the Italian edition, enriched with historical and geographical information necessary to better locate and frame Ivrea and the Canavese area and, of course, Olivetti herself.
More generally, therefore, the book, as observed by some of the first readers, can also serve to illustrate to foreigners the unique history of a company and a territory which, moreover, led to the appointment of Ivrea as an Industrial City of the XX century and UNESCO World Heritage Site.

From the back cover:

A lifetime in Olivetti is an intriguing novel that captures the interest of “Olivettians” and of whoever is not directly related to Olivetti alike by providing new insights and perspectives.
The readers can live their lives once again, “in” and “around” this outstanding Enterprise also pursuing the answers to a number of topics such as:
– what influenced Camillo Olivetti in fulfilling his entrepreneurial vocation to choose Ivrea as company headquarters;
– what was Adriano Olivetti’s managerial approach and how he engaged himself with respect to the more technologic spirit of his father and predecessor Camillo.

A lifetime in Olivetti is also a first-hand account of Adriano’s far reaching vision, clearly revealing that the combination of social commitment and efficiency is not at all utopic but a mean of producing and creating wellbeing and prosperity for all.
The reader will also experience a 50-year long journey starting from a portrait of the early times of Olivetti, as it shined within the context of a small town called Ivrea in the ’40s and ‘50s and beyond.
The author traces the stages through the technological heights that Olivetti was renowned for, up until the battle fought against the crisis that Information Technology suffered worldwide.
Nico Osella draws testimony from his childhood memories and from the tales of his father, combining these with his direct experiences in Italy and abroad when he, as a resourceful and very young man, joins the Olivetti world.
A reliable witness and skillful narrator of episodes, characters and even of scuttlebutt around the water cooler, he nevertheless portrays the events in a human, intellectually rigorous and greatly passionate way.